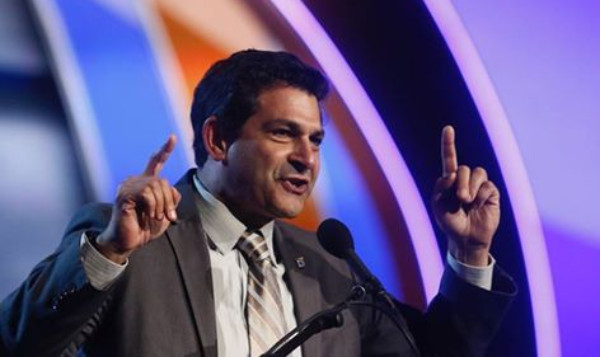 Secretary-Treasurer Jason Rabinowitz addressed 5,000 delegates and guests on the first day of the Teamsters 29th Convention, as the International Union highlighted the incredible success story of Local 2010.

“Joining with the mighty Teamsters Union was the smartest decision our members ever made,” said Rabinowitz.  “Thanks to our members’ hard work, we’ve turned our Local around.”

The crowd roared as Rabinowitz recounted victory after victory Local 2010 has achieved in building membership and Teamster power.

Rabinowitz spoke about the unprecedented growth of our Union; bringing in almost 1,000 new members, including over 800 Skilled Trades workers from UCLA and UCSD, in the past year.

Our success in building our Union has prepared us for our campaign for a fair contract.

“We have a simple message: UC must pay workers enough to live!” Rabinowitz said. “I am confident we will win because our cause is just and backed by the tremendous Teamster power we have built.”

Rabinowitz concluded with some lessons of Local 2010’s experience:

“When we stand together as Teamsters we take into our hands and wield the power of the millions of workers who make our great country work every day,” said Rabinowitz. “When we do so, our power is unlimited, and the future is bright for our great Union, and our great nation.”

Thank you to all of the members who have made our Union the powerhouse it is today.  Together, we will continue to stand together for fairness and respect at UC.