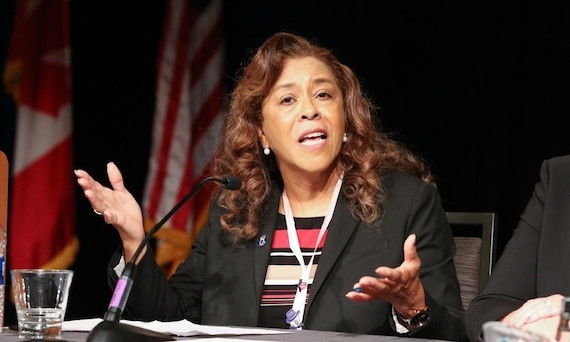 Teamsters Local 2010 was front and center at the annual Teamsters Women’s Conference, as President Catherine Cobb addressed the over one thousand in attendance, sharing our Local’s victories and the keys to fighting back against the attacks on public sector workers.

“Educating and activating workers to build collective power as a Union – is exactly the same fight needed during a contract campaign as confronting the threat posed by ‘right-to-work” laws,” said Cobb.  “Today, as we face an unfavorable decision in the Janus case, the solution is to organize.”

Catherine referred to anti-workers legislation which has decimated worker pay and rights in states across the country.

She also thanked the many in attendance who, during last year’s Women’s Conference, marched down Hollywood Boulevard in support of Local 2010’s fight for a fair contract.

“It was a powerful action and I have never been more proud to be a Teamster woman,” said Cobb. “Because of your support, the power of the Teamsters Union, and our members standing together…We won three contract victories with fair, guaranteed raises for our workers totaling between 19 and 32% over five-year contracts.”

“I couldn’t be prouder of the leadership of President Cobb and the women of Local 2010,” said Secretary-Treasurer Jason Rabinowitz.  “After a year in which we organized 2,300 skilled trades workers into Teamsters Local 2010, it’s great to send a skilled trades Teamster to represent the Local at the Women’s Conference.”

We would like to say thank you to our delegates who flawlessly represented our members at the Women’s Conference.  A huge thank you to all of the members who have helped build our Union into what it is today.