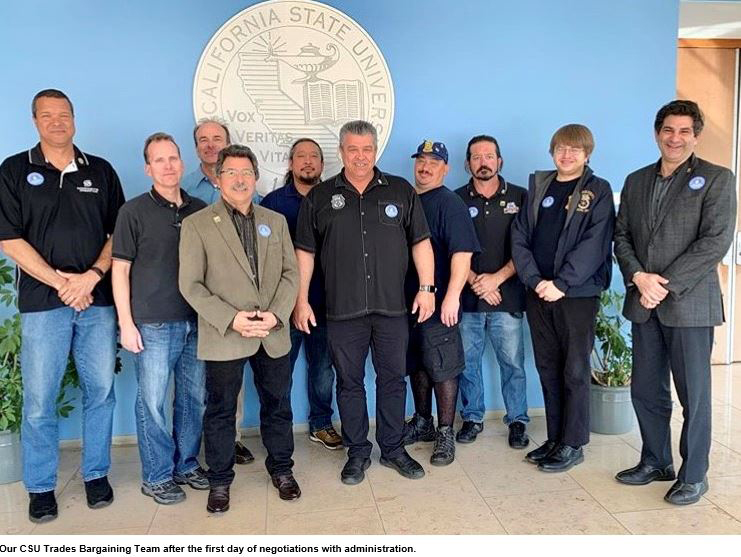 As hundreds of CSU Skilled Trades members throughout the state wore stickers demanding restoration of the salary steps and fair pay, our Teamster Bargaining Team met with management for our first day of bargaining. Our team wore the same stickers at the bargaining table, and began the session by passing our first proposal – to restore salary steps for skilled trades workers.

Chief Negotiator Jason Rabinowitz gave a presentation that detailed the urgent problem: The great majority of Unit 6 members are at or near the bottom of their salary range, even after many years or decades of service, because CSU got rid of salary steps 20 years ago. As a result, Unit 6 members are underpaid compared to Skilled Trades workers at other comparable institutions and suffer wage compression and inversion. Our team members spoke eloquently about the effect that the lack of step increases has had on our members.

CSU negotiators admitted that “inversion” – new hires being paid more than long-term staff – is a significant problem at CSU, and that paying skilled trades staff properly is an important issue. But CSU negotiators argued that CSU “can’t afford” to reinstate step increases. Our Union team disagreed strenuously, and demanded that CSU provide its financial data.

“Of course CSU can afford to pay workers fairly,” Rabinowitz said. “CSU’s budget has doubled over the past decade, tuition is up, executive pay is way up – the only thing that isn’t up is pay for the workers who make CSU work – and the time has come for that to change.”

“CSU Unit 6 Teamsters, it’s time to unite and support our Bargaining Team in our efforts to restore the step system that was lost 24 years ago and put an end to inversion and inequity,” said Drew Scott, Bargaining Team member and Teamsters 2010 Skilled Trades Director. “Let us all set aside our differences and fight together for wages, benefits and working conditions equal to our counterparts outside of the CSU.”

Our Union and CSU exchanged several other proposals on contract language, and agreed to a schedule for bargaining through June 2020. The next bargaining session will be Dec. 17-18. In the meantime, our team and members will continue bringing forward our message to CSU to restore salary steps and pay workers fairly.

You can view our Teamster proposal and presentation on salary steps here.

Check out the pictures of our sticker day here.