Teamsters Local 2010 condemns the brutal murder of George Floyd by officers of the Minneapolis Police Department. We stand with the millions across our country and around the world who are rising up in outrage and anguish to protest yet another killing of a Black American.  We condemn the institutional and systemic racism which enabled this heinous crime, and we demand justice for George Floyd.

To watch the video of this incident is to witness a modern-day lynching committed in broad daylight. The officers murdered a defenseless man by kneeling on his neck, back and legs for eight minutes and 46 seconds as he gasped for air pleading, “I can’t breathe.” Bystanders yelled at them to stop, but the officers continued to assault Floyd for several minutes even after he stopped moving and breathing. Perhaps most chilling was the fact they knew they were being filmed while he lay on the ground lifeless, and yet they murdered George Floyd, clearly unconcerned with the life of the man they were sworn to protect and serve as they confidently yet savagely committed this crime with impunity.

Over and over in our country, African Americans are harassed, brutalized and murdered by police officers and vigilantes, and again and again, justice is denied as the perpetrators avoid punishment. Just a few years ago, also in Minnesota, our Teamster brother Philando Castile, a Black man and member of Teamsters Local 320, was shot five times and killed by a police officer during a routine traffic stop, in front of his girlfriend and her small child. Even though the crime was documented on video, the killer walked away free of any criminal responsibility. Earlier this year, Ahmaud Arbery, unarmed and out for a jog, was stalked and murdered by three white male vigilantes. The killers were allowed to remain free for two months and only after people protested and video of the incident was leaked, were they arrested. Only one of the officers who killed George Floyd was arrested after a mass protest demanded it. His co-conspirators have yet to be charged and arrested.

Oscar Grant, Trayvon Martin, Eric Garner, Michael Brown, Breonna Taylor, Atatiana Jefferson, Miriam Carey, Yvette Smith and countless others whose names we haven’t heard, were killed with impunity.  It is an unacceptable disgrace that in 2020 in the United States, African Americans are still denied the basic freedom to live without fear of being harassed, brutalized and/or killed. Our country must unite to transform a system of institutionalized racism that criminalizes and dehumanizes African Americans who continuously suffer greater unemployment and poverty which leads to them dying and losing their jobs in greater numbers especially during the COVID-19 crisis. We must reject the incendiary racist rhetoric that rains down from the highest offices in the land.

The Teamsters Union unites 1.4 million working people of all races, genders and nationalities. Teamsters Local 2010 is proud to be one of the most diverse locals in the Teamsters organization, from our membership to our staff to our leadership. Our strength as a Union is in our solidarity, so we stand united in demanding justice for all people. We are proud that the Teamsters Union, since its founding in 1903, has opposed discrimination within our ranks and the greater society by standing in solidarity with the civil rights movement and all other movements for equality throughout the years.

The fight for equality must be Labor’s fight because the working class we represent is multiracial and multinational, men and women, gay and straight; therefore, we need to be united to succeed. Racism and bigotry are the antithesis of solidarity because they divide and weaken us for the benefit of the boss. This is why the labor movement has always proclaimed, “An injury to one is an injury to all.”

Now more than ever we call on all Teamsters to be bold and courageous by putting ourselves out front with genuine Teamster spirit to protest and join forces with movements for justice. We must register and vote for leaders who will fight for workers’ rights and equality. The Labor movement must speak out, and lead the way toward a better tomorrow for us all via changed policies, laws and services in our struggle for the rights of working people equality for all. Until all of us are free, none of us are free. 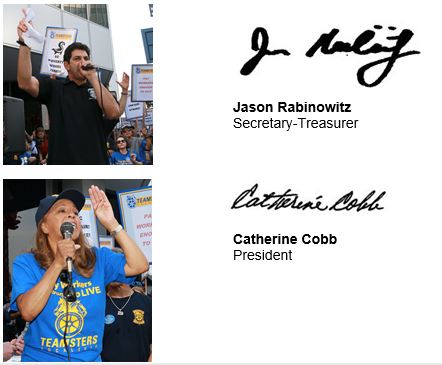 Share
PrevPreviousTell UC & CSU Through Social Media ‘We Are All Essential!’
NextJuneteenth Message from Jason Rabinowitz and Catherine CobbNext