In a major win for working people across the country, President Biden signed the American Rescue Plan Act (ARPA) on March 11. This third round of federal stimulus will provide an estimated $685 million to the UC, while the CSU will receive $1.49 billion. As was the case with the CARES Act, half of the total federal support will have to go to emergency financial support for students while the remainder can be used to support operations, backfill financial losses, etc. This additional funding for UC and CSU will build on the more than $391 million UC has already received and the more than $853 million CSU has received that can go toward addressing the impact of COVID-19 on university operations.

Our Union has made clear that with all of this financial support, in addition to each system’s substantial reserves, that both UC and CSU should immediately rescind all COVID-related layoffs, curtailments, or other cuts to our members.

In addition to this direct support, UC and CSU are also likely to benefit from the approximately $26 billion in support going to the California state government. Earlier this year, after budget analysts projected a better-than-expected $15 billion one-time surplus for California, Governor Newsom reached an agreement with legislative leaders to restore the state funding cut from the UC and CSU budgets in next year’s budget. With this new federal money on top of the projected surplus, our Union will continue to advocate for additional state funding to support the UC and CSU. 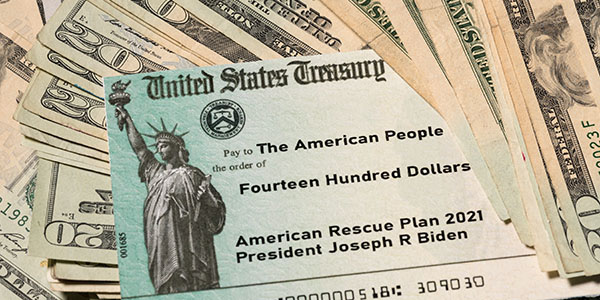 INCOME In terms of support for individuals, ARPA includes one-time economic impact payments of $1,400 per eligible person in a household, including children and adult dependents. The full payments are available for individuals who reported taxable earnings of less than $75,000 annually and $150,000 annually for couples. The payments decline for those earning above those limits and are not available to individuals who report earning over $80,000 or couples earning over $160,000. These payments have already started arriving for many across the country and can be tracked on the IRS ‘Get My Payment’ site.

TAX CREDITS To provide additional support to families, the legislation is temporarily expanding the maximum amount of the Child Tax Credit to $3,000 per child aged 6 to 17 and $3,600 per child under the age of 6 and makes it fully tax refundable/advanceable. The credit begins gradually decreasing for those earning above the income thresholds given before for the economic impact payments.

UNEMPLOYMENT BENEFITS To support the unemployed, ARPA extends $300 per week federal unemployment payments through Sept. 6 and makes the first $10,200 in unemployment income not subject to taxes for those with a household income under $150,000.

HEALTHCARE COVERAGE For employees (and their family members) who lost group health coverage due to a reduction in time or involuntary termination starting in April 2020 and onward, ARPA provides free COBRA health insurance coverage from April-September 2021. A special election window must be provided for anyone who did not enroll in COBRA during the regular enrollment window. We are requesting that the UC and CSU make clear their processes on offering this COBRA benefit.

While this new legislation provides critically needed help to workers, remaining united in our Union has been essential to addressing ongoing issues at both the UC and CSU. Labor had to fight for every gain for working people in this legislation. Remember Teamsters: When we fight, we win.