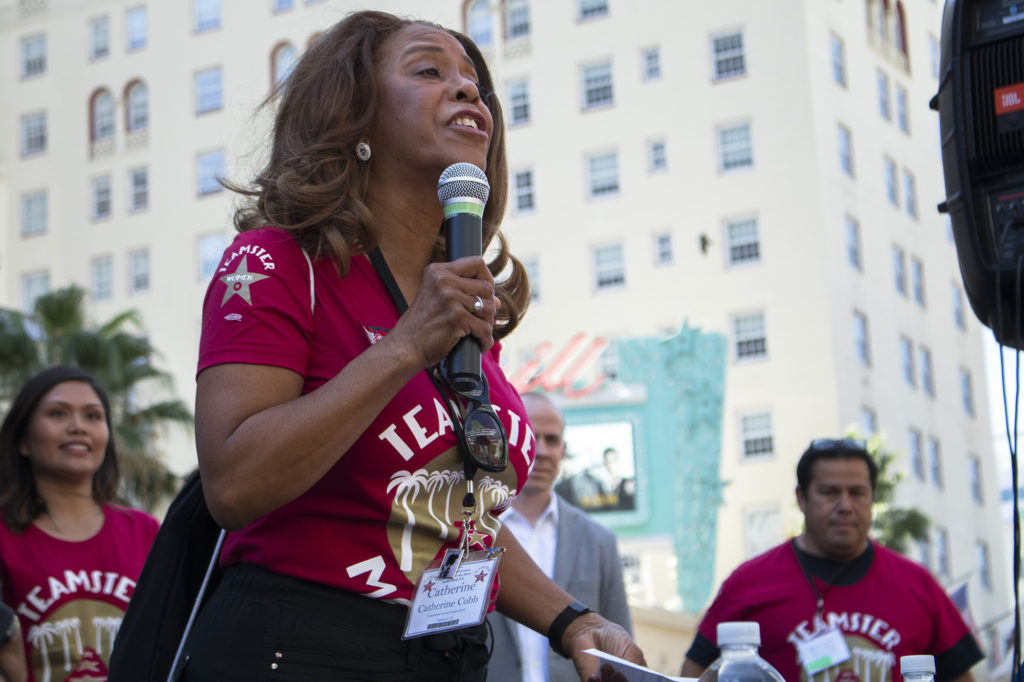 Catherine Cobb is the President of Teamsters Local 2010 and has long stood for the fair and respectful treatment of our members in the workplace. Catherine has been on the front lines of countless actions and meetings fighting for our members and growing our Union into the powerhouse that it is today. At the bargaining table and the picket line, she has been key in winning strong contracts and building up our Union across the state. Coming from the membership, she knows firsthand the issues that our members face and the power in standing together in our Union.

Prior to being elected Local 2010 President, Catherine was a member of the CX-Unit at UC Irvine for 14 years. She worked as an Administrative Assistant II in the campus Department of Physical Medicine and Rehabilitation and then as a Coordinator and Ambassador in UC Irvine’s Housing Department. For years she was subjected to racist bullying by her supervisor but after speaking with a Local 2010 Representative, Catherine was empowered to stand up for herself and her coworkers, ensuring that the manager was held accountable for their actions.

Catherine soon took on leadership roles in her workplace, becoming a Steward in 2013 and then a Chief Steward in 2014. That same year, the members elected her as the President of Local 2010 and was subsequently re-elected in 2016. As President, she has been passionate in confronting the kind of workplace bullying and abuse she faced as a member. Catherine and our Union were instrumental in passing state legislation that for the first time legally defined workplace bullying and abusive conduct while requiring trainings to address the issue. Due to this work, in 2016 she was awarded the Riverside NAACP’s Visionary Award for groundbreaking and effective Union leadership.

Catherine’s belief in fair treatment stems from her childhood growing up in foster homes. She learned the importance of being kind to others and the need for effective communication living in these uncertain and difficult circumstances. Going to college at Cal State Fullerton, Catherine focused on developing her communications skills further by earning a degree in Speech Communication.

Today, she draws on this background to speak on behalf of our Union to employers, politicians, and other labor and community organizations. She now leads the Teamsters Local 2010 Women’s Committee and is a member of the LA County Federation of Labor and Orange County Labor Federation steering committees. Never forgetting her roots; Catherine spends her own time donating to people facing trying circumstances like she did growing up.

Catherine now lives in Ladera Ranch in Southern California with her son, whom she is proud to say is currently attending Columbia University. You will find her throughout the State at worksite meetings, demonstrations, and anywhere else our members are standing together for dignity and respect.