Teamsters Local 2010 members at LAX airport are standing together and winning back their workplace, after suffering for months under a manager who abused them, threatened them, and even called the police on them!

The 21 Local 2010 Teamsters working at LAX under H&W Maintenance are critical to keeping parking services clean and functional at one of the busiest airports in the world. When a new manager was brought in by H&W Maintenance in February 2021, workers hoped he would respect the hard work they do and help them get their jobs done. Instead, this new manager verbally abused them, retaliated against outspoken Union members, fired two workers, and disciplined others indiscriminately.

Local 2010 Teamsters knew they had to fight back. 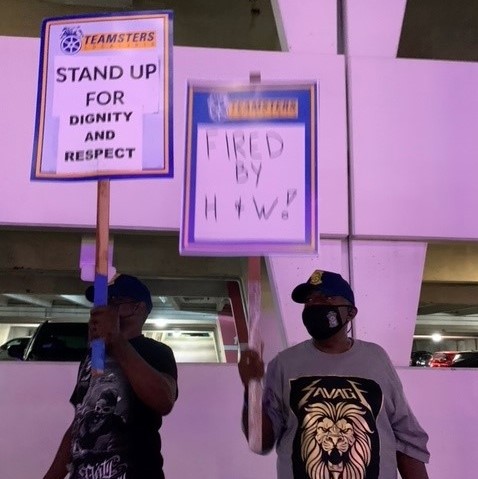 Workers signed a petition, wore union stickers, and this month staged their first-ever picket at LAX to remind H&W Maintenance and LAX management that WE keep their airport parking running! Joined by Local 2010 Secretary-Treasurer Jason Rabinowitz, nearly every single Teamster in our H&W unit showed up to protest abusive management and to call for the immediate return of their two fired co-workers. Thanks to our unity and action, the bosses finally started to listen!

The bullying, retaliatory manager at H&W has been removed and H&W’s contract with LAX is under investigation. However, until our two Teamster brothers are returned to their jobs, and until we get answers on why H&W has failed to pay workers’ health insurance and pension premiums, the fight isn’t over. Energized by the success of these actions, especially our highly visible airport picket, we’ll keep fighting until worker power wins!

“I am inspired by our courageous H&W members, who are showing the power workers have when we stand together as Teamsters! We won’t stop fighting until our Frank and Idovic are returned to work and we will never stop demanding fair treatment for all our members! “