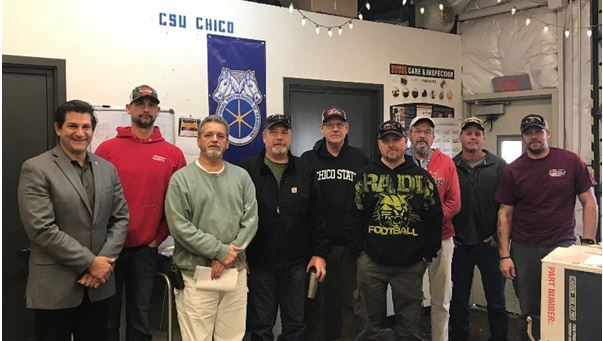 “The Teamsters Union is a family that stands together and supports each other, especially in times of need,” said Rabinowitz. “Our members survived a terrible disaster and were there for each other through the whole ordeal. This is what the Union is all about.”

According to Cal Fire, California’s forestry and fire protection agency, the Camp Fire burned over 150,000 acres, destroying over 14,0000 buildings and killing at least 86 people, making it one of the worst fires in California history.

“You can’t prepare for stuff like this,” said Brannon Pruis, Chico State University Metal Worker. “I have been in Paradise for over 38 years. I grew up here and now you can’t even recognize it anymore.”

“My wife and daughter were able to get out with plenty of time,” said Chris Phillipp, Chico State University Facility Worker. “I went back up and had a hell of a time getting back. It was 38,000 people trying to get out on three to four roads.”

In a matter of weeks, over $300,000 was donated by local Teamster Unions across the nation including $150,000 by the International Brotherhood of Teamsters in Washington DC.

“I have never been prouder to be a Teamster,” said Dave Hawley, Teamsters Joint Council 7 President. “The outpouring of support from Teamsters across the nation has been remarkable.”

The Teamsters JC7 Disaster Relief fund has delivered over 176 checks to victims of the Camp Fire that devastated Northern California earlier this year.

“It doesn’t matter how big or how small,” said Pruis. “Everything helps. The things we are getting from the Teamsters are the things that will help us see tomorrow.”

“It has been crazy seeing everyone come together,” said Philipp. “I appreciate everything the Teamsters are doing. You don’t have to do this but you are.”

We want to thank JC7 and all of the Teamsters across the nation for their support. We will continue to work with our members and their families through these trying times.