Tell the UC to Keep Their Pay Promises for AO2s!

Tell the UC to Keep Their Pay Promises!

Supporters of our AO2 action sent more than 2,000 letters asking UC decision makers to improve their pay proposals in bargaining. 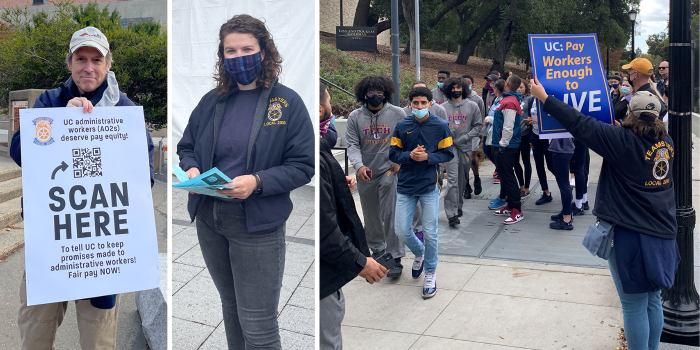 On Saturday, Oct. 23, Administrative Officer 2 workers across the state took part in actions that educated staff, students and the public on the inequitable pay scales the UC is pushing in our negotiations with them and asked for support by way of sending letters to campus and medical center decision-makers.

Bargaining Team members and Union Reps handed out flyers to people entering the UCLA Homecoming football game, the Cal Golden Bears (UC Berkeley) football game vs. Colorado University, and the UC San Diego Men’s Soccer game. The flyers contained basic information on the UC’s unfair pay scale and a QR code to the webpage where they could sign their name to the letter to the UC administrators who continue to stick to their low-ball wage offer for AO2s.

Take 30 seconds to send your letter to UC leadership now! >>

Ninety-seven percent (97%) of AO2s are underpaid compared to their public sector counterparts and the AO2 Bargaining Team continued its bargaining efforts on Oct 25.

After 16 formal bargaining sessions and multiple actions, our Teamsters team is finally starting to see movement from the UC, which is now offering a 1-step increase and a low bonus payment for which the amount is still being negotiated by the team.

The bottom or entry pay for all pay ranges, except UC Riverside which has been tentatively agreed to, is still drastically low so bargaining will continue.

If you have not yet sent a letter to the UC decision makers, do so now!

Tell President Drake to make the Chancellors, Med Center CEOs and Compensation Managers support their dedicated staff who have kept the UC running through the COVID-19 pandemic and bargain fair and competitive pay for AO2s now!